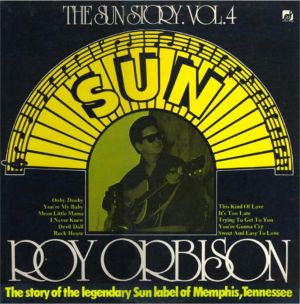 The story of the Sun Record label of Memphis, Tennessee is the story of rock ‘n’ roll music. It is the story of how one man, label boss Sam C. Phillips, was able to create a legend out of the sound he discovered by putting together the music of black blues and white country music. The Sun label was formed in 1952, and Sam Phillips had been in the recording business less than two years. In that time, though, he learned that what the young people of the world wanted to hear was rhythm music and he knew that the rhythm of his own unknown black artists could provide the basis for a new sound in popular music.

In three years, between 1954 and 1956, Sam Phillips realized his dream by discovering many of the legendary performers in the music industry; first Elvis Presley, then Carl Perkins, Johnny Cash, Roy Orbison and Jerry Lee Lewis. Finally, in 1958, he also introduced the listening public to Charlie Rich, the latest superstar to emerge from a career begun in Memphis, Tennessee during the 1950’s.

The Sun label lasted for seventeen years under its original owner, Sam Phillips, and in that time it climbed from a one-man operation to a million dollar enterprise and then declined again during the 1960’s when new forms of music took over. The music recorded by Sun was varied, including country, blues, rhythm and blues, rock and roll and soul, and all the successful artists from Memphis owe much to the existence of the Sun label.

But what really made the name of Sun was Rockabilly — a new music made by young white country singers who used a black beat. And they not only appealed to Southerners in the USA, they were good enough to carry their music all around the world and to present the universal language, rock music.