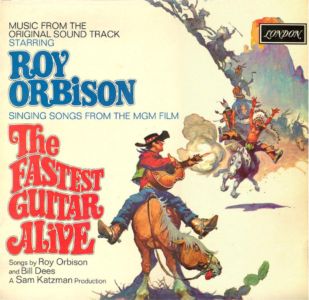 A lone Indian mounted on a horse is silhouetted against the Arizona sky. In the broad valley below, a horse-drawn wagon ambles slowly along. In the wagon are two men and six women. The Indian summons his braves and they swoop down on the wagon, eager for the kill. As the Chief nears the wagon, a strange sight greets his eyes. One of the men raises a guitar and points it as if it were a gun, and much to the Chiefs dismay, the guitar does indeed fire like a gun…

The plot for the rollicking western musical comedy THE FASTEST GUITAR ALIVE is based on actual historic fact. In 1865, during the desperate last days of the Civil War, a group of Confederate soldiers were plotting to rob the U.S Mint in San Francisco. They hoped in this way to finance the buying of supplies which would enable the beleaguered Confederacy to continue fighting and perhaps ultimately win the war. Lee surrendered at Appomattox before the scheme could be carried out. Roy Orbison appears in the starring role of Johnny Banner, a young, guitar-strumming Rebel officer whose guitar converts conveniently into a rifle to fight off attacking Indians (a frequent occurrence). Johnny and his buddy, Steve Menlo (Sammy Jackson) have volunteered to rob the Mint of $ 150,000 in gold bullion. The boys skillfully manage to rob the Mint, then head for El Paso to de live the loot to a southern general.

Stopping at Prescott, the half-way point in their journey, the boys hear that peace has been declared Chagrined to find that they have, by the stroke of a pen, been demoted from heroes of the Confederate Army to common, run-of-the-Mint crooks, they decide to return the gold, thereby redeeming their good names.
Whereupon they find themselves really in trouble.

Seems as if everyone west of the Ohio has heard about their little wagonload of gold and aims to capture it. All kinds of hot and hilarious escape ensue, with double-crossing friends and competing bands of thieves conspiring to prevent the ex-Rebs from clearing themselves. Nick-of-time saving comes from the most unexpected quarter!

THE FASTEST GUITAR ALIVE marks screen debut of Roy Orbison, the brilliant young recording star and songwriter who thus far has sold over 24 million single records, plus nearly a million albums since he burst into popularity short years ago.

Roy not only stars in and sinngs in THE FASTEST GUITAR ALIVE, but also wrote seven songs especially for the picture: Pistolero, Good Time Party, River, Whirlwind, Medicine Man, Rollin’ On and the rousing title tune The Fastest Guitar Alive.

Three Roy Orbison originals were included to complete the album. All ten tunes were composed in collaboration with Nashville-based Bill Dees.

Every song the Wink, Texas phenomenon sings in concert or on records these days is his own composition. Inasmuch as he is committed to recording 40 songs a year for MGM (three albums comprising 10 songs each, plus ten singles) he may furnish as many as 70 songs in any one year from which to select the required 40.
When he first started out, Roy recorded material by writers other than himself and some of these became hits for him. In turn, some of his compositions have provided gold records for singers like the Everly Brothers, Jerry Lee Lewis, Buddy Knox and the late Buddy Holly.

Roy knew the plot for THE FASTEST GUITAR ALIVE months before actual production began. This gave him ample time in which to produce the seven new songs for the production.